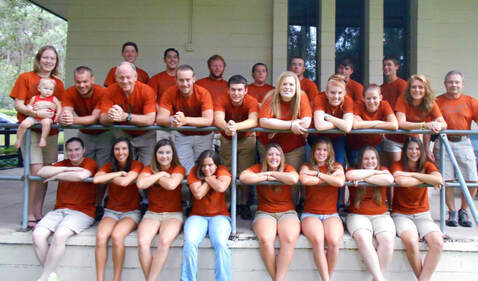 Lake-Swan-Camp-Summer-StaffLake Swan Camp operates year-round, but hosts week-long events from the first week in June until the first week in August. Throughout the remainder of the year, the camp primarily hosts weekend gatherings. It employs eight year-round staff members and adds an additional 20 during the summer, both full and part time.

This year, the camp also hosted Summer in the City every Wednesday over the last eight weeks. The community-wide initiative was organized by Keystone Heights High School administrators to provide wholesome activities throughout the summer for Lake Region students. Organizers also held events at Keystone Beach and Trinity Baptist Church.

Rollins said Summer in the City attendance at the camp ranged between 25 and 45 students. “The feedback we got from the kids and parents was very positive,” he said of the inaugural summer program. While at the camp, Summer in the City participants enjoyed tubing, canoeing, swimming, basketball, volleyball, archery and other activities. Rollins said some of the students also took on the camp’s challenge course, a layout designed to develop communications and leadership skills.

Rollins also said the camp benefited from ample rainfall throughout the spring and summer, noting that he had to raise the facility’s dock twice this year to keep it from becoming submerged. Rising water levels also forced workers to remove the bottom section of the camp’s 140-foot water slide. Rollins said a second section of the slide is now halfway submerged and may have to be removed in the future, if the lake continues to rise.

During the coming off-season, Rollins plans to renovate the camp’s multi-purpose building, including replacing the tile in the dining hall and adding a patio. Rollins said he hopes to begin work on the structure in January. The camp recently completed construction of its $265,000 Lake View Lodge Conference Center.